Junior quarterback Zionnez Spencer pulled off one of the greatest plays in Dunbar history, tossing a clutch touchdown pass on t 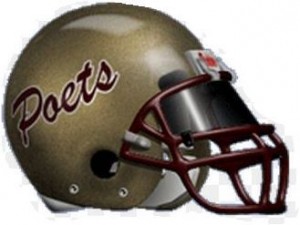 he final play of the game to lead the Dunbar Poets of Baltimore City to a 24-21 road win over Kent Island of Stevensville, Md. in a Class 2A state semifinal on Nov. 28.

Dunbar trailed Kent Island for nearly the entire game; the Poets fell behind 14-0 in the second quarter and were down 21-12 at one point early in the fourth quarter. But Spencer, who tossed four touchdowns in the game to keep his team in contention, made the game’s amazing final play to steal the win. During that play, Spencer scrambled to escape being sacked, kept his balance as he nearly fell to the ground, and zipped a game-winning pass to receiver Ivan Lomax.

The win advanced the Poets to a 2A state final matchup with the Douglass Eagles of Prince George’s County, who crushed South Carroll of Sykesville, Md. in a 43-0 shutout in the other 2A semifinal.

The matchup will be the ultimate test for the Poets (11-3); kickoff is set for 7 p.m. on Dec. 6 at M&T Bank Stadium. Douglass is a perfect 13-0 this season, having crushed every opponent in lopsided fashion. Their average margin of victory this season is 39 points, with Douglass shutting out seven of 13 opponents.