By Lisa Snowden-McCray, Special to the AFRO

The AFRO has received a written statement from a woman who claims that Adam Jackson, CEO of the Baltimore-based grassroots think-tank Leaders of a Beautiful Struggle (LBS), raped her in 2015.

The AFRO has also received statements from three other women alleging that Jackson threatened and intimidated them.

“When he became angry, he blocked doors with his body and punched holes in walls,” one woman wrote.

The statement comes after an anonymous group started a social media campaign in late July taking aim at Jackson, and calling for him to step down from Leaders of the Beautiful Struggle.

“[Adam] Jackson has exercised abusive leadership, a pro-capitalist and misogynist concept of Black nation-building, and implemented scare tactics to not only physically and sexually abuse black women but also (to) disparage and dismiss numerous black women across the city with his facile rhetoric and understanding of black feminism and intersectionality,” one post on the anonymous Me Too Baltimore page read.

The woman who says that Jackson raped her told this reporter her story over the phone a few months ago. She then gave the AFRO a written statement, delivered by a representative of the Me Too Baltimore Facebook. Because of the sensitive nature of the allegations being made, the AFRO agreed to publish their claims without giving their names.

“When I saw a survivor being attacked for telling things that I knew were true, I knew I had to speak up,” she wrote. “I’ve been apprehensive because a large part of me has moved past the pain but there is still a piece of me that lives there. Tearful. Angry. Reaching out for help.”

The woman provided the AFRO with a detailed and graphic account of the alleged rape. The AFRO is not publishing the specifics because some of our readers may find them upsetting.

Despite this, she says that she still volunteered with LBS when the Uprising took place in May, 2015. She eventually broke off from the group because she didn’t feel they were listening to her suggestions or that they were supportive of her. When that happened, she said that a member of LBS dismissed her concerns by telling one of her family members that she’d slept with Adam and was unhappy that he didn’t want to sleep with her anymore.

“I put my heart and soul into the work I was doing at that time, just to have my opinion once again invalidated, this time by referencing an intimate moment that I was uncomfortable about,” she wrote.

Shortly after the Me Too page appeared, Jackson published a message on his personal Facebook page addressing and denying those claims. He said he had never been accused of violence or inappropriate behavior towards women by anyone.

“ANY allegations that I have engaged in a pattern of sexual assault/abuse, verbal abuse or using my position to exploit women are patently FALSE,” he wrote. Later in the same post he added, “I respect Black women and the work they do in Baltimore and in everywhere else in this country. I support sexual assault survivors and their ability to speak their truth and seek justice. I also believe that as someone with a track-record of working to improve the conditions of Black people in Baltimore, I have a right to defend my name and my organization. I will not be bullied or forced into silent submission. This attack against me is cold and calculated, and I will pursue all options to understand the nature of these accusations. I will also work to clear my name by retaining legal counsel.”

In another statement released on his Facebook page this week, Jackson reiterated his innocence.

“I sincerely believe that this anonymous group is executing a tactic of character assassination and a political takedown on the work I’m doing in Baltimore,” he wrote.

LBS has been a growing force in politics both in Baltimore and in Annapolis since their start in 2010. They have been influential in defeating and weakening legislation relating to mandatory minimums and cash bail. In addition, they were instrumental in creating the framework for, and helping administer, the city’s $12 million youth fund. While Associated Black Charities (ABC) is in charge of distributing those funds, LBS works with one of the outside consulting companies hired by ABC to oversee the grant application process, according to Diane Bell-McCoy, CEO of ABC. The fund has received $75 million in requests and will announce grant recipients later this year.

Who are Me Too Baltimore?

A person communicating with the AFRO,  who did not want to be named in this story, but identifying themselves as one of the many organizers and communicators for Me Too Baltimore, said via email that the group is comprised of roughly five Black women “along with other allies.” They claimed that the group reached out to Jackson, prior to the creation of the page. They also said that three additional women have contacted the Me Too Baltimore group since the Facebook page was created  in July.

Asked why the organizers have chosen to remain anonymous, they wrote, “The most important identities that needed to be protected are survivors. The identities of organizers will be disclosed in time.”

Alleged victims have made their accusations now , they said, because of individual survivors “coming to realize that they share commonality in abuse and abuser.”

When asked by the AFRO why the accusers did not go to the police at the time of the alleged incidents, they wrote, “While the offenses that were committed were vile and caused emotional damage, we would be nothing short of foolish to ignore the relationship that Black citizens have with police.”

“Further”, they added, “To involve the police in this matter may very well create a greater schism in our own community and take us further away from real accountability. What we want was to take an earnest step towards policing members of our own community.”

They said that supporters of Jackson and LBS have been trying to delegitimize the Me Too Baltimore group’s efforts, by “absurdly characterizing us as White women outside of the community or ‘Russian hackers.’”

Activist groups like FORCE: Upsetting Rape Culture, who use art and large-scale actions to bring attention to issues of abuse, and Hollaback Bmore, which works to end harassment in public spaces, have voiced support for the people behind the Me Too Baltimore page.

“We have been raised in rape culture. Therefore, it is going to take some re-education in every sector of our society to thin differently about sexual assault,” Charnell Covert, FORCE’s community organizer told the AFRO via email.

Jackson has his defenders in Baltimore’s tightly knit Black activist community. Many people left messages of support for Jackson beneath his posts, with some calling the allegations against him attempts to assassinate Jackson’s character.

Activist Erricka Bridgeford, one of the co-founders of Baltimore Ceasefire, told the AFRO that she was proud of Jackson’s response to the Me Too Baltimore page and said that, as a public figure also doing activist work in Baltimore, she could identify with the position he is in.

“I am very familiar with being attacked and mischaracterized with whole conspiracy theories about me posted on people’s pages without specific incidents,” she said. “I’ve been raped twice in my life. I’m familiar with what abuse looks like and feels like — sexual violence, physical abuse…there were a lot of what felt to me just accusations about overall behavior or overall practices that couldn’t be proven to be true or untrue the way it was written.”

Later, she released a statement addressing the incident on her Facebook page.

“What I’ve experienced is that several opportunities for transparency and healing were rejected, but destruction of a man’s reputation was the goal,” she wrote. But she also said “to be extra clear: Myself and other Black women have told Adam that if he HAS been abusive, we will hold him accountable. Do not twist what I’m saying to mean that I’m unwilling to hold anyone accountable for sexual and physical violence or manipulation.”

Ericka Alston-Buck, who founded the Sandtown-based children’s recreation center Kids Safe Zone, said that she has known Jackson professionally and through a close friendship for some time. She said that he has always been genuine in his activism.

“Being an advocate isn’t his job. He is for the uplifting and forward moving of black people. That is who he is. It’s not something he does when the cameras are rolling or when someone’s recording or when people are watching,” she said.

Alston-Buck says that she stands behind him 100 percent.

Natasha Pratt-Harris is a professor at Morgan State University who specializes in criminal justice. Via an emailed statement to the AFRO she said that Black people often have to walk the line between false accusations, often levied by White people, and real harms done to Black women.

“Black protest has focused heavily on Black male victimization – violence and wrongful criminalization, where women’s victimization has not been consistently highlighted.  #MeToo has done something that no other movement has done – it acknowledges that we must believe victims, thus giving Black women their voice, acknowledging victimization,” she wrote.

“It is absolutely imperative that we NEVER assume that one is attempting to silence any victims by acknowledging ALL victims – #MeToo and #NotMe victims must be given equal acknowledgement in a system that has historically and currently not given victims their voices or the justice they deserve.”

She added that victims should not only seek legal counsel, but mental health services as well.

The AFRO tried to contact Jackson numerous times via text message and by phone for comment on this story. We also contacted LBS through email and by phone. Neither responded to the AFRO’s requests for comment by press time. 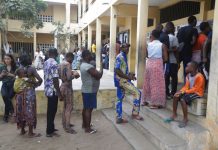