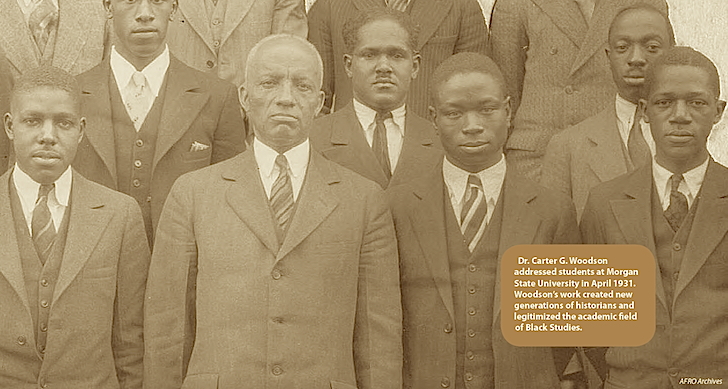 Carter G. Woodson had a dream – to legitimize and establish the true place of the Black race in the world’s history, and in so doing change the Negro’s view of himself and the public’s view of the Negro, leading to racial equality and an elevated existence for the Black community. And, in 1915, with the creation of his premier legacy, the Association for the Study of Negro of Life and History (which later becomes the Association for the Study of African American Life and History), Woodson created the major vehicle for making that vision come true.

“Carter G. Woodson taught African Americans and Americans more generally the importance of self-knowledge and how it is central for making a democracy work… [and] ASALH was the mechanism he created for what I call his ‘self-knowledge project,” said Daryl M. Scott, current president of ASALH.

“Woodson viewed ASALH as a means of transforming how people of African descent saw themselves and were seen by the people of the world,” he continued. “It was an institution whose mission required it to collect, research and create knowledge about the African past and the African-American experience and disseminate it to the public with the hopes of informing race relations both here and abroad.”

In January 1916, Woodson launched what would become the cornerstone of ASALH, 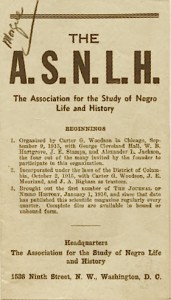 {The Journal of Negro History} (now {The Journal of African American History}).  From its inception, the pages of the scholarly quarterly became a treasured space where harmful lies and propaganda about the Black race could be crushed, golden nuggets of forgotten or hidden Black history could be found and precious artifacts of the African Diaspora experience displayed in scholarly fashion.

“It has been an important intellectual space for a variety of scholars to present their work on various issues related to the African-American community,” said Dianne Pinderhughes, a professor of Africana Studies at the University of Notre Dame. She added, “It has been instrumental in moving the public perception of Black history from a limited perspective to a broader, deeper view.”

For 30 years, Woodson edited the {Journal} and it flourished under his direction. Many say it is one of the most enduring and influential aspects of his legacy.

On the occasion of Woodson’s death, then-president emeritus of Morgan State College, D.O.W. Holmes, said in a written tribute to the “father of Black history” published in the May 13, 1950 edition of the {AFRO}: “The ‘Journal’ is indeed the monument to Carter Woodson far more enduring than anything we can possibly conceive as a memorial. Scattered throughout the libraries of the schools and cities of America, it is a constant source of information to the scholar and an inspiration to every person of colored blood.” 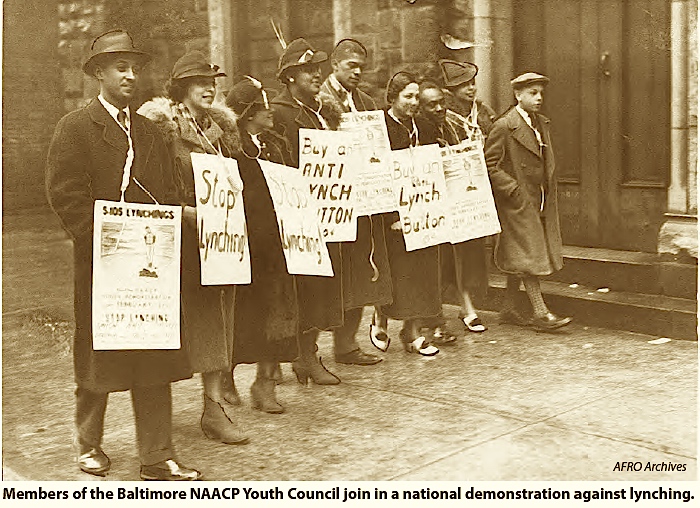 ASALH’s annual meeting has also been a welcoming intellectual space—scholars, college students, archivists, librarians and lay persons from a variety of disciplines get the chance to network, explore and present papers on various aspects of Black history and experience.

The organization’s work made Black history a legitimate and accepted subject of intellectual inquiry, inspiring the creation of Black studies programs in colleges and universities throughout the United States and birthing generations of Black historians, included noted intellectuals such as John Hope Franklin, Charles Wesley and Benjamin Quarles;

But ASALH’s mission was never just about appealing to academia, experts said.

“We have been the nexus between the community and the academy,” Scott said.

“ASALH is not and has never been an association of PhD’s,” he added. “The Association is at bottom an association that belongs to the community and the community is at the foundation of what we do. From 1915 to 1968, for the first 53 years of our existence, there was no such thing as Black Studies; it was the Black community studying itself.”

Pinderhughes, the Notre Dame professor, said ASALH’s egalitarian membership has given it an advantage.

“It is an organization with broader impact compared to some of the traditional academic organizations,” she said.

The initiation of Negro History Week in 1926 considerably advanced the cause of making the Black experience accessible and acceptable to the general public. As did the launch in 1937 of the {Negro History Bulletin}, a magazine aimed at putting Black history into the hands of primary and secondary school teachers, students and the general Black reading public, according to {Organizing Black America.}

Sixty-five years after Woodson’s death, ASALH’s mission has not changed and Woodson’s vision continues to be realized, Scott said.

“Woodson’s vision was very clear and straightforward, consequently, we’ve not had to change much in 100 years,” the ASALH president said.

In 1976, the efforts of ASALH and others bore fruit when the celebration of Negro History Week was expanded to Black History Month. Each year, the organization provides the theme for the month’s observations. This year—appropriately—the theme arose out of ASALH’s centennial anniversary.

“We’ve been in a season of a lot of 50-year, 100-year and 150-year anniversaries for a while so they have pretty much determined the themes,” Scott said.

But mostly, particularly with topical themes, the Association tries to use history to illuminate matters facing the modern-day 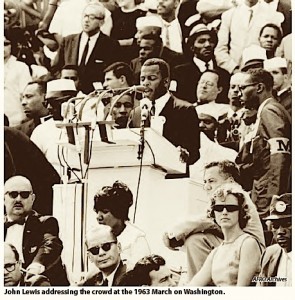 ASALH continues to face challenges as it seeks to fulfill its mission—as with many other organizations, garnering funds has been a challenge as has been the obstacles inherent with trying to adapt to a digital age. In fact, the Internet has reinforced the importance of ASALH’s work as being a source of reliable information.

“What is apparent to me is that the Internet has made it necessary to the Association to take more seriously its original approach [to disseminating Black history] because the Web is awash in bad information,” Scott said.

Pinderhughes said that’s one of many reasons ASALH will continue to be an integral and necessary organization or the Black community and broader American public.

“It has been a consistent source of information about Black history and its importance in U.S. everyday life,” she said. “I think it is an organization that’s going to be around for a long time.”