TriceEdneyWireService—Each year, most of us make a list of things we plan to do in the coming year.  Most of us really intend to do what we plan, but, unfortunately, most quit within a few weeks.  Let’s make this New Year different.

My suggestion is doable.  Please read Howard Zinn’s book, A People’s History of the United States.  I am reading it now and will be reading it well into 2018!

Who is Howard Zinn?  He was a social activist, historian, author and playwright.  Noam Chomsky said,  “Zinn’s work literally changed the conscience of a generation…”  Contrary to the lies and fabrications of the origins of this country, Zinn provides a counterpoint to many of the ‘alternative facts’ of history.  He’s no longer living, but his poignant reflections remain.

Zinn’s premise is that too much history is written from the perspective of governments, conquerors, diplomats and leaders.  He writes to provide ‘voice’ to those far too frequently ignored – war resisters, labor leaders and fugitive slaves.  He begins his book telling the story of Iroquois women who played a key role in their communities.  Women were important and respected in Iroquois society.  It’s a story introduced by Mr. Zinn – a story that I’ve never read until now!

It’s important for people to hear the voices of women of all cultures and backgrounds.  Those who acknowledge women as a ‘monolithic irrelevancy’ do great disservice to all women and to our daughters and unborn granddaughters.  Zinn’s story of the Iroquois women is one to be replicated among contemporary groups of women.

Members of my organization, the National Congress of Black Women, have always been respectful of women’s achievements and have edified every milestone.  While aware of our own significant historical contributions to our communities, we are appalled by disregard of our efforts.  Countering those who discount us, we adopted the theme OUR STORIES: OUR TRUTHS.  Our point:  too often, we are ignored or stories told about us are an unfavorable reflection of who we really are.

There’s no better image of our impact than Black Women’s participation in Federal, state and local elections.  In the last three presidential elections, Black women voted overwhelmingly for candidates Obama and Clinton.  Arguably, with more resources channeled into Black communities, 2016’s outcome could’ve been much different.  Black women were important in the last two Virginia State elections.  In each, Democrats swept the offices of Governor, Lt Governor and Attorney General.  In 2017, Black women voted 95% for Democrats and created a power shift in the General Assembly.  In 2017, Black women were instrumental in electing a Black woman Lt. Governor in New Jersey, and at a rate of 98% led an unexpected defeat of Roy Moore in the Alabama Senate race.

We’ve demonstrated that bemoaning our circumstances is foolish. We’ve shown that difference is made by organizing, voting, resisting and persisting.  We must become revolutionaries instead of rioters.  Dick Gregory reminded us that revolutionaries organize, have plans and know their ultimate goals.  He said that rioters simply express their anger and frustration until they are tired, then go back into their corner– never knowing the difference between victory and defeat.  Revolutionaries know that change may take time through a series of highs and lows.  Rioters have no measurable indicators of the direction their actions took them.

#45 has made our future bleak.  He has reversed or attempts to reverse the hard-earned progress we’ve made.  His cannot be the last word.  Zinn’s book can inspire the courage necessary to engage and make a difference.  Instead of choosing to wait, watch and hope while sitting on the trash heap of history, we must exercise our choice for achievement. We must organize, resist, persist until the change we want comes. 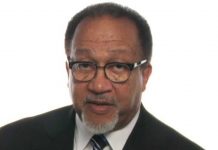