Taking yet another opportunity to send the message that Baltimore men are committed to stopping the violence in this city, they gathered, 300 strong at the west end of North Avenue, July 11, supported by neighbors and friends. 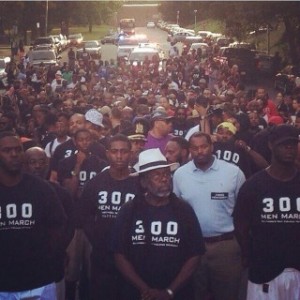 The annual event, a 10 mile march, was organized by the 300 Men March Movement, an outreach initiative created by community activist Munir Bahar and Baltimore City Councilman Brandon Scott, according to the organization’s website. In addition to holding the annual march, the group trains men for direct engagement in communities plagued by violence.

Jahiti Brownfish – a community activist and co-founder of Hip Hop entourage Brown F.I.S.H. with the late Derrick OOH Jones, local teacher, rapper, and organizer of the Save A Dope Boy campaign – joined the 300 Men March Movement at last year’s demonstration, committing to the group and going out into neighborhoods as part of its outreach and anti-violence activities.

What struck Brownfish most about that first march was the number “dope boys,” young men who sell drugs on street corners, that joined the march as it traveled down North Avenue on its path from east to west Baltimore. “For that one moment they had an opportunity,” said Brownfish. “They were presented an opportunity to say do you care about your community – outside of what you’re doing – do you care enough to walk? Because here’s the thing: you can’t front that walk . . . that (5 mile) walk is no joke and you’ve got to walk back and it’s a process of reflecting.”

The march involved men of all ages and races. Brownfish mentioned an 80-year-old White man who made all 10 miles of this year’s march.

The march was hardly an all-male affair, however. Baltimore City Mayor Stephanie Rawlings-Blake spoke at the opening of the demonstration, and many women helped to serve as floating registrars, signing up men who would join the march as it progressed eastward and back, as well as providing water and moral support for the demonstrators.

Aneesah Morine, a host of the women’s issues podcast Diva’s DISH and member of the multi-media art exhibit group Baltimore Girls, served as a registration floater and described the event as power filled. “I was just proud to see the men walk against [violence], on behalf of awareness towards it, and our children seeing that there’s a future that – you can live longer than 25. There are men out here living longer than that and have vision other than a corner,” Morine said.

For Brownfish, more than just a chance to stand in unity with his fellow citizens against violence, the march was an opportunity to practice community level organization and activism. “No matter what you want to do in your community, whatever change you think you need to make, the first step is that some people have to show up somewhere to make that change – whether they’re going to vote, whether it’s coming to a building, whether it’s getting information – and our community has yet to learn that skill,” said Brownfish. “So to me the march, even though it’s an anti-violence march, it’s also our opportunity to organize ourselves, to practice that in a non-reactionary way.”

#WordinBlack: FDA talks vaccinations for younger students ahead of next school year

Medical debt: The other part of the pandemic’s fallout

Together, we should seek justice for the Tulsa massacre 100 years...

More than 200 bodies found at Indigenous school in Canada

#WordinBlack: FDA talks vaccinations for younger students ahead of next school...