“The United States has high hopes for our relationship with Nigeria, which is an important partner in our counterterrorism and regional development efforts. We look forward to increasing collaboration as Nigeria takes steps to ensure civil and human rights for all Nigerians, expand economic opportunity, and address corruption challenges that have so hampered its progress and fostered recruitment by terrorist groups such as Boko Haram. I support President Buhari’s efforts to develop and execute a national anti-corruption strategy. Shining a light on those who divert funds from the people of Nigeria, robbing them of economic opportunities, is an important step toward ending the ‘resource curse’ that has plagued the largest economy and most populous country in Africa. On this fifth anniversary of enactment of the Dodd-Frank bill, which includes the Cardin-Lugar provision (1504) to encourage transparency in the oil, gas and mining industries, it is important to recognize the important role theNigeria Extractive Industries Transparency Initiative (NEITI) can play in ensuring such transparency and the need to institute anti-corruption reforms in entities like the Nigerian National Petroleum Corporation (NNPC).

“No meeting with the leadership of Nigeria could ignore the plight of hundreds of schoolgirls kidnapped by Boko Haram. Any of the girls who are still alive must be returned home and the fate of all of those taken must be made known. How a country treats its women and girls is a strong barometer for its economic and social success. I urged President Buhari to make human rights of all Nigeria’s citizens a priority.” 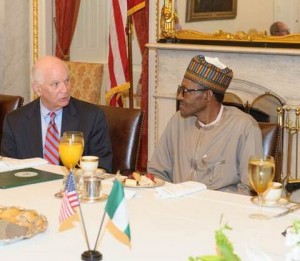