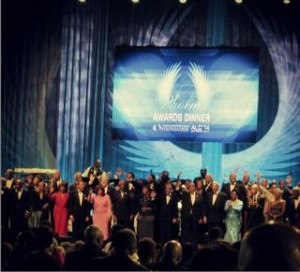 WASHINGTON D.C. — Even though the Black community has gained several liberties over the years, there is still much more to gain. And, in order to do that, the Black community’s need to vote is essential, which is what several speakers – including President Barack Obama – emphasized during the Congressional Black Caucus Foundation’s (CBCF) 44th Annual Phoenix Awards Dinner Gala Sept. 28 at the Annual Legislative Conference (ALC) held in Washington D.C..

“Our work is not done, when too many children live in crummy neighborhoods, cycling through substandard schools, traumatized by daily violence,” Obama told attendees at the Walter E. Washington Convention Center in Northwest D.C. “We’ve got unfinished work, and we know what to do. That’s the worst part. We know what to do.”

He said that even though there was a 30 percent decline of uninsured African Americans, high school graduation rates are at a record high, dropout rates are declining, crime is declining and incarceration rates have dropped by 10 percent, Americans still have to work on investing in infrastructure and manufacturing and research and development that creates jobs.

“So, that’s the world we got to reach for, the world where every single of our children has the opportunity to pursue their measure of happiness,” Obama said. “That’s our unfinished work and we’re going to have to fight for it, got to stand up for it and we have to vote for it.”

The Obama White House has launched a much-touted program meant to address the particular challenges faced by young Black men called My Brother’s Keeper. In his address, the president mentioned a companion program called My Sister’s Keeper, which is intended to help African-American women and girls achieve success.  First Lady Michelle Obama heads the initiative.

Rep. Chaka Fattah (D-Pa.), chairman of the CBCF board of directors, said the Black community’s concerns on justice, education, health and economic development are both “timely” and “timeless.”

Getting out the vote was a common topic at the dinner and conference, themed “It starts with you.”

The dinner also acknowledged the work of Attorney General Eric Holder who announced his resignation Sept. 25.

Rep. Marcia Fudge (D-Ohio), chair of the 43-member Congressional Black Caucus, told attendees that Holder “has never hesitated to remind us that our pursuit of justice is a fundamental one and critical to the divide of our democracy.”  She wished him the very best in his next endeavors.

The resignations of Del. Donna Christensen (D-V.I.) and former Congressman Melvin Watts were also acknowledged.  Christensen is running for governor in the Virgin Islands and Watt is the new director for the Federal Housing Finance Agency.