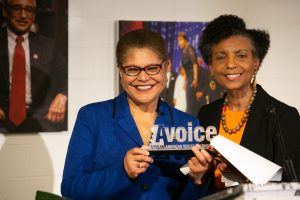 The 116th Congress includes fifty-five members of the Congressional Black Caucus, an incredibly diverse group of African Americans who approach Black liberation (although some might not use the term) differently. Among the fifty-five, there are five who now chair House committees, including Congressional representatives Maxine Waters (D-CA), who chairs the Financial Services Committee, Eddie Bernice Johnson (D-TX) who chairs the Science, Space, and Technology Committee, Robert “Bobby” Scott (D-VA) who chairs the Education and Labor Committee, Bennie Thompson (D-MS) who chairs the Homeland Security Committee, and Elijah Cummings (D-MD) who chairs the Government Oversight Committee. Cummings was the only one of the five who was not present, understandably so when one reflected on his leadership in the hearing that examined Michael Cohen, the jail-bound attorney who formerly represented the Nation’s Prevaricator-in-Chief.

Each of them talked about the challenges they face in their roles, especially the fact that progressive legislation that leaves the House of Representatives is often unlikely to pass the Republican-dominated United States Senate and the obstreperous Senate Majority Leader Mitch McConnell (my words, not theirs). But each also talked about issues they will address in their leadership. Congresswoman Waters can subpoena tax returns and bank records. She spoke of the many ways banking boards lack diversity and plans to establish a diversity and inclusion subcommittee as part of the Financial Services Committee. Bennie Thompson and Eddie Bernice Johnson talked about directing money to HBCUs and about the ways that some universities are able to get the majority of federal dollars. Congressman Bobby Scott intrigued me when he talked about the way the media is interested in drama, not substance. On a day when he dealt with both the minimum wage and higher education legislation, most of the questions he got from the media were about Blackface and other scandals in Virginia.

The search for the salacious has been the theme of the 45 administration. One does not have to search far to find payments to prostitutes, pandering to potentates, and other chicanery. The real trickery, however, is happening when our regulatory structure is being decimated, when payday lending rules are hanged by the Consumer Financial Protection Bureau to make predatory lending easier and more exploitative; when education regulations are being changed to make access for Black and other students of color even harder than it is now; when labor regulations are being changed to exploit unions. The federal minimum wage, at $7.25, has not increased in a decade. As such, the Raise The Wage Act should be making headlines. Instead, all cameras, all eyes are on the scandals that dominate this administration.

In celebrating the Congressional Black Caucus, I’m not touting their perfection, because the collective caucus is flawed as any other organization. My biggest bone to pick with Caucus members is all of them won’t sign or align themselves with HR 40, the reparations legislation that Congressman John Conyers (D-MI) introduced thirty years ago. Many say the reparations conversation is impractical. From my perspective, if you are interested in economic justice, you must be interested in restorative and reparatory justice for the descendants of the enslaved people who built this country. That means developing public policy to close the wealth gap. That means developing public policy to increase access to education. That means educating a nation with leaders and teachers who seem to think it is okay to run around in Blackface, hand children cotton bolls or more alarmingly, have children (in South Carolina) actually pick cotton and sing slave songs. That means examining the ways that racist (yes, racist) legislation has exacerbated, not closed the wealth gap.

Our Congressional Black Caucus and, indeed, the Democratic Party that all of them belong to, is flawed, but there are accomplishments, as well. The challenge for us is to lift up the accomplishments amidst a culture that values scandal instead of achievement.

Julianne Malveaux is an author and economist. Her latest book “Are We Better Off? Race, Obama and Public Policy” is available via www.amazon.com for booking, wholesale inquiries or for more info visit www.juliannemalveaux.com