Bowser, who was elected for a second term, and the city have hosted events all week as part of their #DCProud2019 initiative. The celebration took place at the Anthem at the newly renovated Southwest Waterfront, 901 Wharf St. S.W. Washington, DC 20024.

The excitement was palpable as hundreds of people, with fresh fades and immaculately coiffed hair, piled into the multi tiered venue. Each floor was packed as the evening delivered on good food and an open bar.

The crowd was a mix of zip codes, demographics and fashion choices, but the one constant was an enthusiasm for the evening, the District and Mayor Bowser.

“I really appreciate the things the mayor is doing for the city,” said LeTrisha Wallace, a Clinton resident who came out with her friends. “I have told several people she reminds me of the female Marion Barry. Because she’s doing so much for the city. It’s like she has that personal touch.”

Wallace is hopeful the mayor can tackle what she thinks are the District’s main issues.

“The biggest concern for me is the crime,” Wallace said. “It’s one of the major issues that need to be addressed. We have to do more to protect our children.”

The talent was a lineup of stars such as Ledisi and D.C. native Raheem DeVaughn as well as strong local eclectic performers. The We are One Band graced the room with classic Frankie Beverly and Maze covers, while EU featuring Sugar Bear and the Backyard Band brought the go go to the party. The dance floor which spanned the width of the stage above it was packed the entire night. 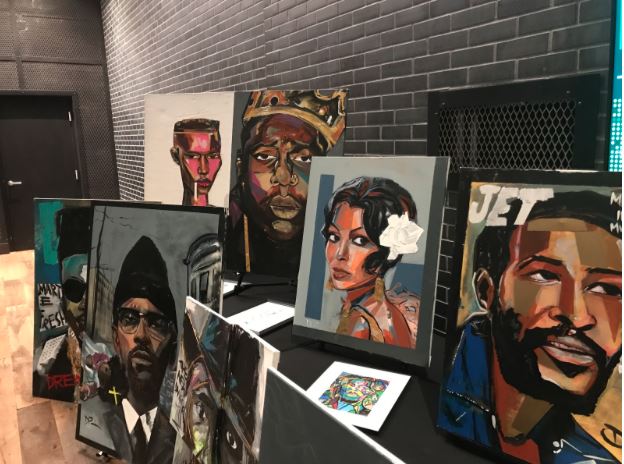 DJ Gemini served as one of the resident DJs and kept the music classy, while catering to the ranging demographics in the room. At one point he called out “where my 80s babies?” Before launching into a suite of 90s R&B like Bell Biv Devoe. Then he brought it right back to the present with Cardi B and Bruno Mars.

Just outside the main doors artist Demont Pinder was invited to create an installation for the event. His portraits draw from pop culture icons and other inspiration figures including Malcolm X, Barack Obama, Aretha Franklin, D.C. native Marvin Gaye and many others.

“I wanted to be in attendance to support as well as be humbled to have this audience to showcase my work,” Pinder said.  “You’ll see all cultures in my paintings. I try to document as much of my culture.”

Latasha Garner, a Maryland resident said she was looking forward to the entertainment.

“They have a lot of good singing and events,” Latasha Gardner, a Maryland resident said as she stood in line to get inside the party.” Even though she isn’t in D.C. proper she said she was a fan of Bowser and wanted to point out a couple of things she would like to see addressed in the new term.

“Do something about the traffic,” said Gardner who is also a rideshare driver. “And potholes, that’s number one.”

“They’re doing a lot of construction but don’t forget about the roads.” 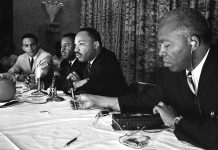 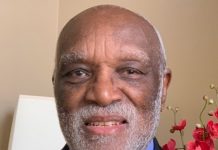