By George Kevin Jordan, Special to the AFRO

Mayor Muriel Bowser announced a bus lane pilot program that would provide “bus only” lanes on two of the District’s busiest streets, in order to improve transit time for commuters and reduce congestion on the road.

“These designated bus lanes on H and I Streets Northwest are part of our summer pilot as we continue to look for ways to make transportation more efficient for commuters,” Bowser said.

The pilot program runs from now until September 27.

Bowser said of the particular streets chosen: “Each day more than 80,000 people, or 40 percent of all Metro bus riders, ride buses that use H or I Streets on a portion of their route. On the busiest blocks we can see up to 70 buses per hour and that’s just a small demonstration of how many people are moving through our downtown.”

People use these buses to get to and from work, get to appointments, connect to Metro. People travel through here for many reasons and while we hope the painted red lanes and signage will deliver the message that lese lanes are for buses only, we also know that isn’t enough.”

Bowser said the both Department of Public Works (DPW) and Metropolitan Police Department (MPD) will be be collaborating to make sure other vehicles do not use the designated lanes.

“Our hope is to find a way, particularly in this coordinated effort to move more quickly and attract more riders. The future of transportation is going to be finding continuous ways to get cars off our already congested roads.”

“This pilot is an important opportunity to demonstrate the critical role of dedicated bus lanes, to improve bus service and relieve congestion,” said Metro General Manager/ CEO Paul J. Wiedefeld. “We commend Mayor Bowser for her leadership and commitment to creating a strong and reliable bus system that will provide better, more efficient service for our Metrobus customers.”

“This pilot will give us important data about how we can make bus travel more reliable and attractive for residents and commuters traveling through downtown every day,” said District Department of Transportation (DDOT) Director Jeff Marootian. “Improving bus reliability is a major step in the right direction for meeting our sustainable transportation goals.”

Bowser and her administration have pushed several initiatives during budget season to make transit easier and more efficient.

As part of their budget proposal, the mayor’s office earmarked:

However, in the final D.C. Council vote approving $15.5 billion, of the things nixed was the free portion of the D.C. circulator. The program is still expected to expand to Ward 7 and other areas. 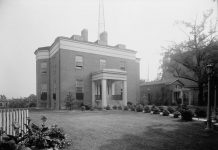