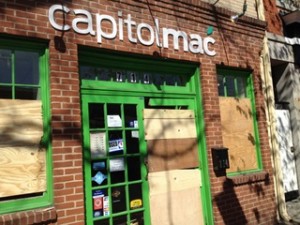 David Davighi, owner of the property that houses Capitol Mac in Fells Point, received a call early April 28. Looters had broken in around midnight by throwing a cinder block through the front window of the computer repair shop. They then stole computers that were set up as display models and broke through the front door on their way out. “If anything, it makes people whose mind they[protesters] want to change dig into their positions,” he said while checking to make sure the windows were properly boarded up.

While most of the focus on the destruction caused by the riot on Monday night was on West Baltimore, several businesses in Fells Point were also looted. The vast majority of Fells 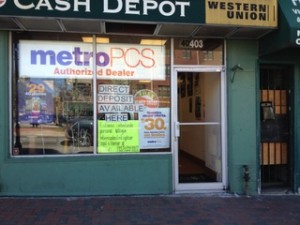 Point was open for business the next day but several were closed while they tried to clean up the destruction and calculate their losses. In addition to Capitol Mac, at least two Metro PCS’s were hit and robbed of phones and other valuables, said Jesus Viveros, a worker at the Metro PCS located on S. Broadway.

Gold Sun, a pawnshop on Fleet near Eastern Avenue was also hit. However 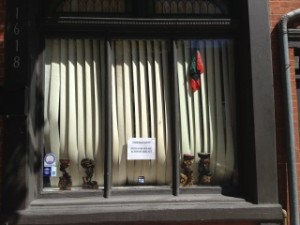 , the owner Gus Plakas, decided to take matters into his own hands instead of waiting for the police to respond while thieves made off with around $5,000 worth of goods. “They were crawling through the door [after shattering the glass] and I was chopping them up,” he said. When asked what he was “chopping them up” with he replied that he was using a machete. He then showed this reporter a machete covered in what appeared to be dried blood.

Bill Would Make Possession of Ransomware a Crime in Maryland

Proposed Rule Could Limit the Number of Bills Senators Can File