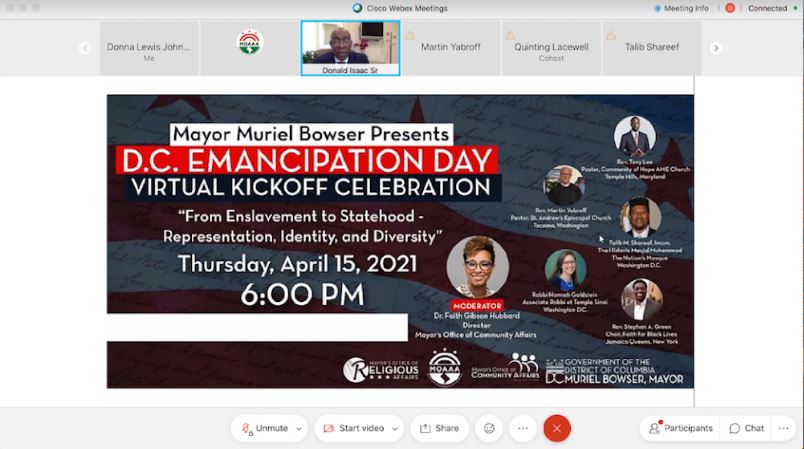 By Donna Lewis Johnson
Special to the AFRO

On an ordinary day, D.C. does not miss an opportunity to advocate for statehood and it surely wasn’t going to miss the unique opportunity that D.C. Emancipation Day provides. So, on April 15, Mayor Muriel Bowser’s Office of Community Affairs held a virtual discussion on the city’s quest for the right for voting representation in Congress, which it sees as another form of freedom.

“From Enslavement to DC Statehood – Representation, Identity, and Diversity,” featured an interfaith panel engaged in a frank conversation about what has prevented the District from obtaining statehood. The religious leaders from diverse denominations seemed to be on the same page.

“Statehood has been connected to racism,” said Rabbi Hannah Goldstein of Temple Sinai in D.C. “This is a racial justice issue and we have to help White people see it.”

Emancipation Day commemorates the act signed by Abraham Lincoln on April 16, 1862 that abolished slavery in D.C., freeing over 3,000 men and women eight months before the Emancipation Proclamation. D.C.’s lack of self-determination stood in sharp relief against the backdrop of history.

“Respecting the dignity of every human being means giving people the right to be represented,” said Rev. Martin Yabroff, an Episcopal priest based in Tacoma, Washington.

Because D.C. taxpayers do not have voting representation in Congress, they do not have full control over local affairs, as demonstrated on January 6 when the Defense Department denied a request by Mayor Bowser to expand the responsibilities of the D.C. National Guard so that the guard would be authorized to protect and restore order at the Capitol Building during the insurrection.

“Justice is not something we have to wait for in the great bye and bye,” said Rev. Stephen A. Green, chair of Faith for Black Lives, a New York-based coalition of faith leaders committed to Black electoral empowerment. “Statehood is about a movement of human dignity.”

The D.C. statehood movement has been mostly a long, hard slog since it began in 1980. But on April 14, legislation to make D.C. the 51st state advanced from the House Committee on Oversight and Reform for the second consecutive year, reports The Washington Post. Yet, the legislation will likely face a filibuster in the Senate, the Post also notes.

Faith Gibson Hubbard, the event moderator and director of the Mayor’s Office of Community Affairs, said, “The District of Columbia is regularly seen as a place where you bring issues to the National Mall about injustice,” asking, “How can we use those examples of advocacy to help people rethink statehood?”

Rev. Tony Lee, senior pastor of Community of Hope A.M.E Church in Temple Hills, Md., responded, “I think we need to have some real, honest conversations about the two D.C.s— D.C., the seat of government, and the D.C. that folks live in.”

“It would be a shame for D.C. to end up with statehood and the folks who have been there for so long get displaced,” Rev. Lee concluded.