Public safety is vital, but often methods for curbing crime result in unfair treatment, unnecessary arrests, and mistrust. For decades this type of behavior has been prevalent in areas of poverty and communities of color, according to law enforcement officials. 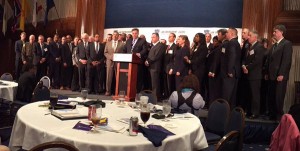 To reduce mass incarceration while correcting public safety measures, a group called Law Enforcement Leaders to Reduce Crime and Incarceration – comprised of 130 current and former police chiefs, sheriffs, prosecutors and attorneys – gathered Oct. 21 at the National Press Club in Northwest Washington, D.C. to discuss strategies for ending improper imprisonment. The members are from all 50 states and the initiative is a new project of the Brennan Center for Justice at New York University’s School of Law.

“Too many Americans, particularly low-income communities and communities of color, are being torn apart by our overly punitive justice system,” said Cornell Brooks, president and CEO of the NAACP. “Seeing law enforcement officials from across the country come together to address problems in the justice system sends a powerful message. We welcome these leaders to our efforts.”

Co-chairs of the Law Enforcement Leaders are Ronal Serpas, former superintendent of the New Orleans Police Department, and Garry McCarthy, superintendent of the Chicago Police Department. “Police related shootings are down 68 percent in the last four years,” said McCarthy, noting that Chicago is designing a different system of policing that other cities are beginning to notice. “Complaints against officers are down almost 50 percent in the last two years and (we) are making 20,000 less arrests.”

However, Lanier did not attend. According to MPD Officer Sean Hickman, Lanier was testifying on body cameras at a D.C. Council Judiciary Committee hearing.

“We need to make sure that we’re locking up the right people for the right reason,” said Beck. “We have to look at things such as treatment. It can’t be just about arrest. We need a task forward that makes sense.”

McClelland said he believes the federal level should be more involved in making state decisions for equity in crimes. “There are state houses that don’t want the federal government to run their business but there are incentives for every state to get federal funding through grants, asset forfeitures, all these things that are important in law enforcement,” McClelland told the AFRO.

He said President Obama should create a commission to investigate the entire criminal justice system, similar to what President Lyndon B. Johnson did in 1965. “[It should be] a full-fledged commission, not a task force, to examine every aspect from incarceration, sentencing, grand juries, corrections, the whole system,” McClelland said.