By Maya Pottiger,
Special to the AFRO

College applications, homework, a part-time job, family responsibilities, and what to wear to prom — those are the typical activities of a high school senior in the United States. But today’s students aren’t living in typical times, and we’re not only talking about the COVID-19 pandemic.

Nowadays, violent crime, coupled with mass shootings, is a daily reality for students. Being a part of Generation Active Shooter Drill and then worrying about your safety in your neighborhood has an undeniable effect on kids — but just how much of an effect?

Answering that question is why Jayla Nickens, 18, decided to find out how violent crime rates were impacting her and her peers’ education. She spent her senior year at Washington, D.C.’s Friendship Collegiate Academy matching SAT scores with violent crime rates in the city’s wards.

Violent crime has been on the rise nationwide during the pandemic, and it’s reached levels we haven’t seen since 2016, according to FBI data.

In 2020, nearly 102,000 victims of violent crime were between the age of 10 and 19, and an additional 28,000 were under 10, according to FBI data. This is an increase in both age ranges compared to 2019, and up even higher than 2018. The most common place to experience violent crime for the last decade has been in a residence.

And, in 2020, guns became the leading cause of death among children for the first time, surpassing motor vehicles.

Though her report is not available for public viewing, Nickens shared her findings exclusively with Word In Black. Her research showed that there’s a negative correlation between SAT scores and violent crime, and it fueled her to want to find more answers.

Nickens, who will start her freshman year at American University in fall 2022, spoke with Word In Black about her reporting project.

WORD IN BLACK: Hi, Jayla. I’m so excited to talk to you today and learn about your project. To start out, can you tell me about it?

JAYLA NICKENS: This was the first time AP Research has been provided. That class is an independent study type of research class where students are able to decide what topic they want to conduct research on, but they had to specifically choose a topic that identified a gap in existing research.

I decided to conduct my research on D.C. public schools’ unintentional influential factors, such as the environment unintentionally impacting D.C. public schools, thus harming students’ academic achievement. D.C. is not a state, so because of that, it’s not as heavily researched as other states. If you were doing this investigation, you would see other state districts being more heavily investigated. When I was doing my literature review, I kept finding information on how the environment impacts education for New York school departments, or Chicago, or California, but you found little information for D.C. So I decided to conduct my research on specifically D.C. public schools.

WIB: How did you come up with that? Why were you thinking about it? And why were you interested in pursuing that?

JN: I became interested in pursuing this research topic because I live in D.C., I attend a D.C. public charter school, and it just came to my curiosity about how my environment is personally impacting my academics since I live in a heavily violent area and also a high poverty area. I just was curious to what extent can poverty and violence impact my academics and my peers’ academics, personally, thus harming our ability to be as successful as someone who isn’t as heavily impacted by poverty and violence.

WIB: Can you tell me about how you conducted it, how long you spent on it, and the different methods and processes of how you did it?

JN: After we settled on a topic and identified the gap of research we want to investigate, I did a literature review where I was reading the background research that’s already been conducted by experts and stuff on education overall.

I wanted to investigate how education policies can be implemented based on the knowledge of environments impacting students’ academic achievement. The main educational policy I was focusing on was the Every Student Succeeds Act. I was arguing how it is possibly flawed because it doesn’t address these environmental issues that are impacting public education.

So, the purpose of my research overall was to bring attention to how we can improve education reforms by considering the impact of poverty and violence in a student’s neighborhood to improve their education overall, especially for minorities and students who live in high poverty areas, high poverty housing, and low-income families.

I conducted a bivariate analysis. And by bivariate, I use two variables that I analyzed, and the two variables were SAT scores versus violent crime reportings in D.C. I did a comparison between high poverty wards and low poverty wards. By doing my research, I learned that wards that are in low poverty are wards Two, Three, and Four. And those are the three wards that I was analyzing that categorize as low poverty. The high poverty wards are Eight, Seven, and Four. And just by looking at those six spectrums and pinpointing what schools are located in those wards, and by looking at those schools, I gathered average SAT scores from those schools and also the crimes located in those specific wards, and then matched the data points using Excel.

I used Excel to make spreadsheets and scatter plots to find the correlation. The line of regression data point — that showed me the degree of association, which was a strong negative association, which means as violence was increasing, SAT scores were decreasing.

WIB: Prior to this, did you have any experience working with data or doing any sort of data analysis or anything?

JN: I don’t have that much experience, but I have experienced conducting research based on doing AP Seminar in 11th grade, where I was doing similar research papers, but instead of investigating the gap in research, I was analyzing other people’s conducted research.

WIB: Can you tell me a little bit about what you found in this analysis and what you learned? 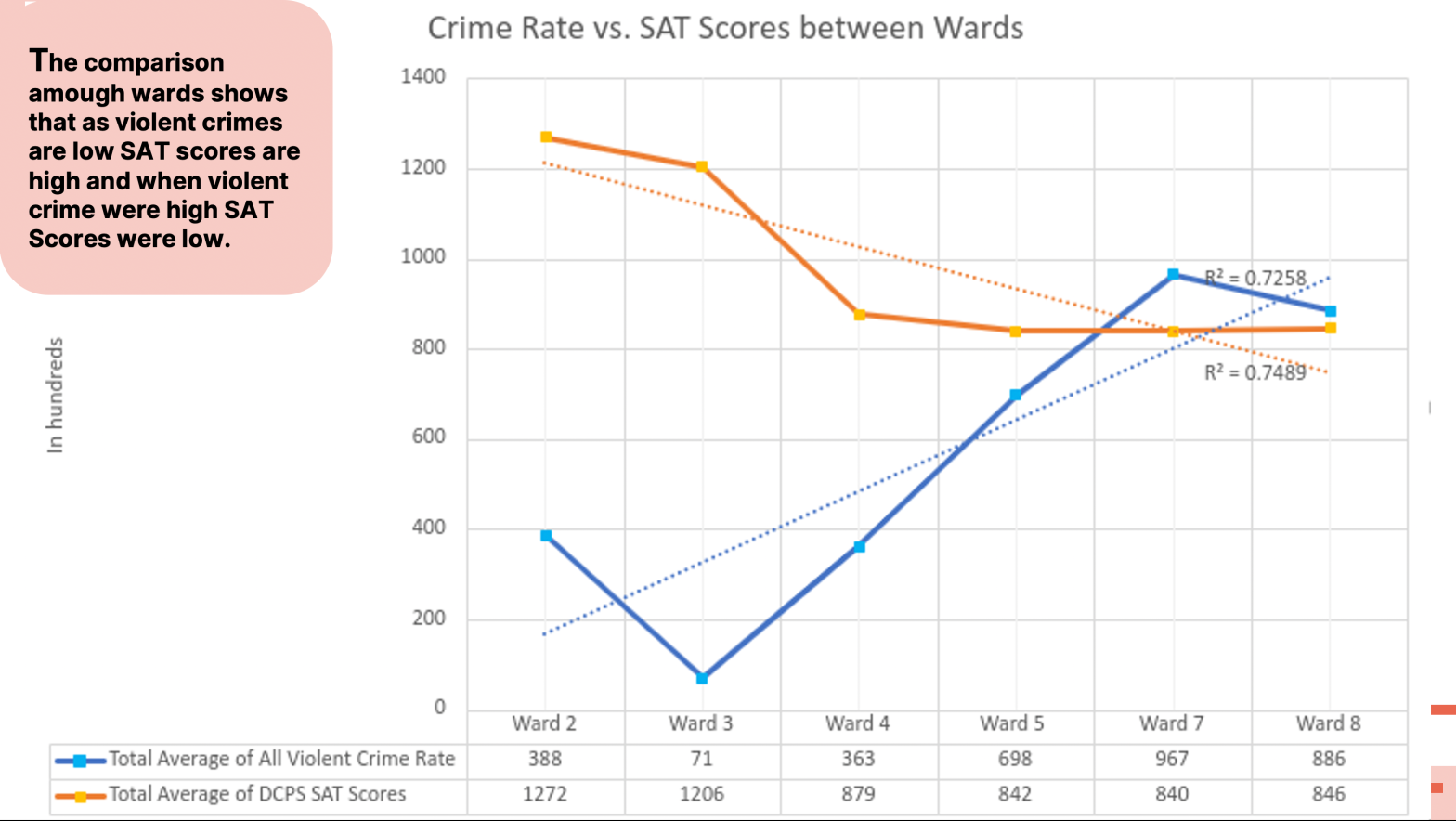 WIB: Did anything that you learned through this that surprised you?

JN: It was what I was expecting to see. Doing this project made me want to learn more about the deficits of environments and test out other variables, like possibly analyzing graduation rates, or more specifically AP test scores, or just core curriculum exams across D.C. public schools to really see if there is a more accurate impact on academic performance than just analyzing SAT scores.

WIB: You sort of answered my next question, but how will doing this project influence you going forward?

JN: Doing this research project made me more interested in conducting research and curious to find more answers to my questions on institutions and America and not just the education institutions, but maybe even political or mental health or health policies that can be impacted by variables that we do not yet know of.

WIB: What did you take away from doing this report?

JN: My takeaway is, overall, educating myself and my peers and showing the world that there are young students out there that are curious to be or even interested in being social advocates at a young age, and how their curiosity can spark this desire to be social advocates. And this is the start of my journey to be a type of advocate.

WIB: What are your plans for the fall?

JN: My plan for the fall is to attend American University and major in psychology. But there are so many things I want to major in, or even minor in, which are sociology, political science, data science, and even arts. I want to do research and sociology, political science, and psychology. And so doing this research project kind of stretched that passion or interest in those subjects.

This interview has been edited and condensed for clarity.

Help us Continue to tell OUR Story and join the AFRO family as a member – subscribers are now members!  Join here!