It has been nearly a quarter of a century since Frances Cress Welsing’s The Isis Papers: Keys to the Colors opened the dialogue on racism-White supremacy as a biological imperative to White genetic survival. The collection of essays deconstructing racialized codes in behavior took on an almost prophetic tone during the inaugural Black Power Women’s Conference hosted by the National Black United Front (NBUF).

The conference, held March 27-29 at Howard University’s Blackburn Student Center, provided a welcoming platform for Welsing, an internationally-known psychiatrist, whose work spawned a new discourse on race – including the rap group Public Enemy’s 1990 Fear of a Black Planet.

As the nation grapples with the state-sanctioned murders of several young Black males at the hands of White law enforcement, Welsing’s challenge to the standing-room only crowd, was to ask and examine, why.

“The struggle for White genetic survival means that there must be a killing of Black men. We have to really understand at a scientific level that if the [Black] men are destroyed then there is no fear of genetic annihilation because women cannot impose sexual intercourse,” Welsing said.

Welsing writes in The Isis Papers that a system is practiced by the global White minority, on both conscious and unconscious levels, to ensure their genetic survival by any means necessary. “I don’t make such a great distinction between Black men and Black women because it is more about what we need to understand as Black people,” Welsing told the AFRO. “At one time you could focus on the women and at another, on the men, but we have to be careful that we make no division between the two of us. We must understand that we both are struggling against racism-White supremacy to the extent that as it destroys the men or the women, it destroys the people.”

The system of racism-White supremacy attacks non-Whites, especially those of African descent, in the nine major areas: economics, education, entertainment, labor, law, politics, religion, sex, and war. And according to Welsing, no one is exempt. “We are in a critical time period and I hope people are aware that even if you become the first Black president it does not excuse you from attacks from a vicious system of racism-White supremacy,” said Welsing, who began writing about racism while training in psychiatry at St. Elizabeth’s Hospital from 1963 to 1966. 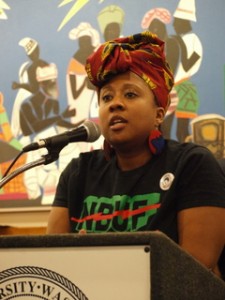 In taking down the medical histories of patients, Welsing said she found that among Black patients at St. Elizabeth’s racism always played a pivotal role in their malaise. “Racism wasn’t talked about then or now. Just look at what happened when Starbucks tried to talk about racism. A great big corporation where the customers are White and the servers, different minorities, and the Whites said they are not going to talk about race and if forced, they may throw their coffee. Eric Holder, our attorney general, asked if we were a nation of cowards, unable to talk about racism. The response to Starbucks says ‘yes,’” Welsing said.

Welsing said social scientist Neely Fuller’s list of basic counter-racism behaviors remain key in Black people disrupting their own oppression. Among them: stop name calling one another, gossiping about one another, squabbling with one another, snitching on each other for personal gain, being discourteous and disrespectful to one another, and stop stealing, robbing, fighting, and killing each other.

“We have to determine that something negatively impacting our lives is going to be brought to an end, but you cannot bring it to an end if you do not understand it. You can complain from now to forever, but you have to treat it scientifically and investigate it. Racism as a total system – it covers all areas of people activities.

The Black United Front is an organization comprised of concerned and committed individuals and organizations who have united to assume responsibility for working and leading the struggle for a better life for themselves and their children.

Voting With A Purpose: Inside The Upcoming, First-Ever Word In Black...

Black Women Murdered by Men Nearly Always Killed by Someone They...

10 Things You Should Do More Often