Presumptive Democratic presidential nominee Hillary Clinton addressed a national gathering of the African Methodist Episcopal Church on Friday in Center City on the heels of 72-hours of violence across the country perpetrated along racial fault lines. 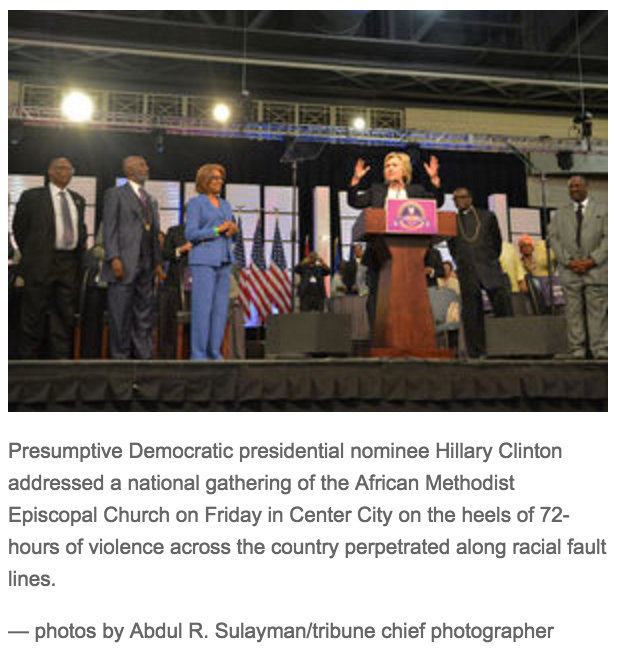 A string of police-involved fatal shootings of two Black men on consecutive days this week was followed by the shooting of 11 police officers in Dallas, with five fatalities.

The recent spiral of violence started Tuesday when a Baton Rouge, La. police officer fatally shot Alton Sterling, 37, while he was pinned to the ground. On Wednesday, Philando Castile, 32, of St. Paul, Minn. was fatally shot during a traffic stop while his girlfriend video recorded the event on her cell phone.

Clinton centered her speech on the killings, using the opportunity to state the need for gun control and criminal justice.

“I also come tonight as a mother and a grandmother to two beautiful little children and like so many parents and grandparents across America, I have been following the news over the past two days with horror and grief,” Clinton said. “There are many unanswered questions about each of these incidents. When we know as much as we can, there must be a just accounting. For now, let’s focus on what we already know deep in our hearts. We know there is something wrong with our country.” 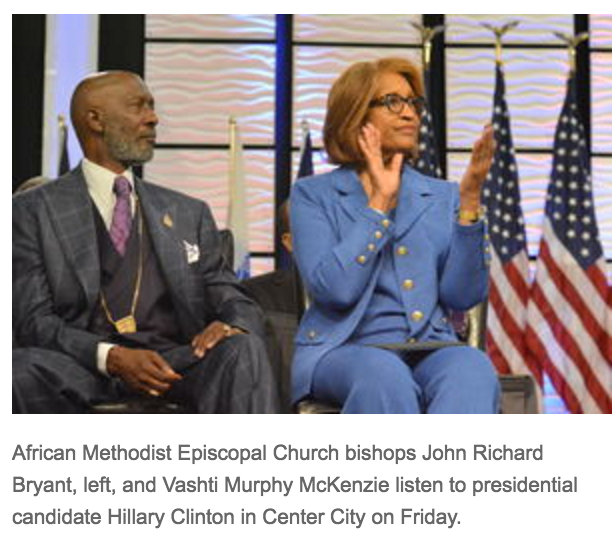 Clinton continued “we need to listen to each other.White Americans need to do a better job of listening when African Americans talk.”

The crowd of AME faithful and church officials, largely African American, applauded and some shouted in agreement.

She called out the names of Black victims of police brutality and said this year, 123 Black people have been killed by police.

“We know there is clear evidence that African Americans are much more likely to be killed in a police incident than any other group in American. And we know there is too little trust in many places between police and the communities they are sworn to protect.”

Clinton lined out some promises on criminal justice reform she would enact if elected.

“We would bring law enforcement and communities together to develop national guidelines on force used by police officers,” she said. “We will make it clear for everyone to see when deathly force is warranted and when it is not.”

Stating “families are being torn apart by mass incarceration,” the candidate said she would “reform sentencing laws.”

The speech was precluded by a spirited gospel choir performance, comprised of singers from different AME districts.

Bishop Vashti Murphy McKenzie, the first woman to be elected bishop in the AME Church, ushered in the ceremony demanding change, as she acknowledged the killings in Louisiana, Minnesota and Dallas as repetitive and exhausting.

“What happened this week in Baton Rouge … what happened in Minnesota and Dallas — it makes you sit up straight [and] pay attention. It reminds you, someone anywhere could be caught in a senseless act of violence,” she said. “When will we stand up and say enough is enough? I’m tired of sending children to school wondering if they will be killed in school or on the way home.”

At this point, McKenzie was preaching, with her voice rising.

“We are tired of promises,” she said. “It’s time to deliver on the promises of the Constitution of the United States. Enough is enough.”

Reaction from the crowd on Friday at the Pennsylvania Convention Center to Clinton was at times measured, but largely supportive. 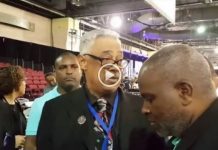 Winner of the 2nd Episcopal District, Frank Madison Reid III talks with us moments after his victory. Reid is carrying on the legacy of... 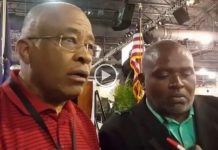 Former Baltimore Mayor Kurt Schmoke explains to us why Frank Madison Reid III deserves his win as Bishop of the 2nd Episcopal District. 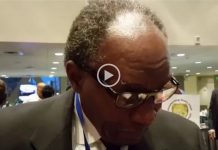 Arthur Stone comes to Philadelphia from Augusta, Georgia. He shares his thoughts on Presidential Candidate Hillary Clinton and her visit to the 50th Quadrennial...