By Tommy Corsi, Special to AFRO

If you were a journalism student of Frances L. Murphy’s, then you knew you needed to be to class on time and bring your very best to the table. Murphy had a way of demanding the best in her students, through discipline and encouragement, to always push further in the field of reporting.

Murphy, who passed away in 2007, was posthumously inducted into SUNY Buffalo State Communication Department’s Hall of Fame on Nov. 15. Her daughter,  current publisher of the AFRO American Newspaper in Baltimore, Md., Dr. Frances “Toni” Draper, accepted the award on her mother’s behalf during an evening ceremony on the Buffalo campus.

Murphy was the publisher of the AFRO, which was founded by her grandfather, John H. Murphy Sr., in 1892. The publication is the longest running family-owned African-American newspaper that has been since its inception.

Murphy was a professor for 10 years in Buffalo State’s Journalism Broadcast and Speech program, which is now part of the Communication department.

Murphy’s ideology was embedded with integrity, perseverance, and duty to serve the people of her communities through quality journalism that she believed they deserved. It is what drove the department to bestow her with the biennial Hall of Fame award that honors department alumni and associates who have reached national stature in their fields.

“We are really excited to have honored her. This is journalism at its very best, right here in our own department,” said Dr. Deborah Silverman, department chair.

Professor Joseph Marren was a student of Murphy’s, and said she was always looking to help improve the environment and people that were around her.

“She was one of those editors who made you do better, because she was always challenging you to better yourself in the field,” Marren said. “She was challenging, in a really good way.”

Associate Professor Dr. Bruce Bryski has been teaching in the department at Buffalo State since 1983 and recalls his first years as a faculty member alongside Murphy, who was known as Franky to her friends and colleagues.

“Franky was a part of the foundation of this department, and you always need somebody great who can start something and provide a foundation that you can build on. And to me, I believe that that is who she was, she created a very genuine foundation here,” Bryski said.

Dr. Draper gave a presentation on the future of the Black press to faculty, students, members of the college community and the public in the afternoon prior to the induction ceremonies.

The evening’s events began with the induction of students into the Lambda Pi Eta Honor Society and were attended by Buffalo Mayor Byron Brown, a 1983 journalism graduate, who came to honor Murphy. The four-term mayor said not a day goes by that he doesn’t draw on the lessons instilled in him by his favorite former professor.

Prior to her mother’s induction into the Hall of Fame, Dr. Draper gave a speech that looked back on her mother’s life. She read a letter that Murphy wrote near the end of her life that gave guidance to her children to rejoice, work hard, and come together through her death.

“To me, death is no time for tears,” Murphy wrote, “but a time for celebration, a time to bring families together so they can worship together, plan together for the future, and then have fun.”

Tommy Corsi is a senior at Buffalo State College with a major in journalism and a minor in philosophy who hopes to incorporate an ethical nature with his practice of journalism, business, and advertising. 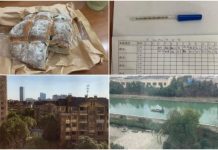