By Lenore T. Adkins, Special to the AFRO

Is it time to retire the longtime “East of the River” moniker and instead rechristen the neighborhoods east of the Anacostia River “East End?”

A community forum with D.C. Council members Vincent Gray (D-Ward 7) and Trayon White (D-Ward 8) wrestled with that emotional issue, with the politicians saying it doesn’t matter what the neighborhoods are called if the same quality-of-life issues persist there — those include crime, poverty and little access to fresh food.

Rather than fretting about a name change, politicians said people should focus on addressing the things that give “East of the River” negative connotations, and work to improve education and healthcare, address the housing crisis and other issues.

“It doesn’t matter what you call it if you don’t change the dynamics of what it means to be able to live in a certain place in the District of Columbia,” said Council member Gray, who is also D.C.’s former mayor.

WAMU reported that Gray has used “East End” in legislation and pasted it onto his official Council website.

At the forum, Gray admitted to calling the communities “East End” when he was mayor and said he’s not looking for a name change, but if it allows residents to discuss the characteristics and dynamics of where they live, “then it will have served its purpose.”

But some residents who spoke up at the forum, held at Garden Memorial Presbyterian Church, questioned why a name change should be up for discussion at all.

Betty Scippio has spent decades living “East of the River” and argued that rebranding those neighborhoods with another catchall phrase erases their identity.

“When you take away East of the River, it is some of my identity you are taking away from me, because that’s what I grew up with,” she said.

Jo Knight, a resident living in historic Anacostia who moved there from Northern Virginia two years ago, doesn’t see any negative connotation about living there, but says the politicians as the communities begin gentrifying.

“Who are we trying to change that connotation for? And my sense is it’s the developers,” Knight said to applause.  “If the people who are renaming this area are developers, they’re also going to be in charge of the branding of the city and that takes the power away from the people who live in my neighborhood, and that’s really concerning to me.”

The dialogue, hosted by the Anacostia Coordinating Council at the behest of the Rev. Anthony Motley, attracted roughly 30 residents.

Future sessions will cover steps to branding a community, “Chocolate City,” as well as the history of the terms “East of the River” and “East End.” 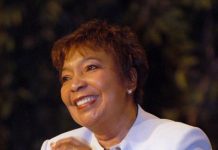 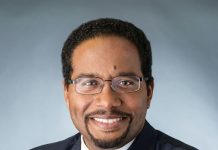