In January, Donald John Trump referred to Haiti, El Salvador and African nations in general as “sh*thole countries,” during a closed-door meeting of a bi-partisan group of congressional leaders and Trump Cabinet members.

Trump’s disparagement of African nations and other countries came as one of the apexes of the ongoing national debate on immigration; he infamously launched the campaign that propelled him to the presidency imploring the xenophobic trope of Mexican immigrants as rapists, murderers and criminals in general.

Now, after 983 days (as of Sept. 30) of chaos, Trump stands at the precipice of becoming only the third U.S. President in history to be impeached (Richard Nixon resigned in 1974 avoiding what appeared to be sure impeachment).

The East African nation of Uganda most assuredly falls under Trump’s definition of a s-hole country.

As his presidency seems to unravel, I wondered what Ugandans think of the s-hole president now?

“I think the predicament in which he (Trump) finds himself in is obviously internal domestic politics in the country (United States). His behavior, which I think to many Africans and the rest of the world, is very bizzare to say the least,” said Kenneth Mpyisi, director of KS Policy Think Tank, in Uganda. Mpyisi, a former diplomat, does not miss the irony (or devine reciprocity) of Trump’s presidency being imperiled because of foreign entanglements.

“So, the fact that the impeachment inquiry is related to actions, or alleged actions taken by the president and his administration outside the U.S., brings a different context to it,” Mpyisi added.

In less than three years, the institutional damage to the country wrought by the 45th president is hard to calculate.

Yet, the terror he has induced in the minds and hearts of those who yearn for America is also very real. For many, in less than three years, Trump has desecrated the ethereal narrative Ronald Reagan put forth of America as “a shining city upon a hill whose beacon light guides freedom-loving people everywhere.”

“What I think is, while Trump is still president, it is literally impossible to get to the U.S.,” said Catherine Akoli, a 20-something waitress from Kampala.

“There are very many requirements and…for a foreigner from another country…it is impossible. I don’t know if Trump thinks we are suicide bombers or something.”

The reality is perhaps no American president has done more in a shorter time to damage the reputation of the United States with its allies and perhaps, just as importantly, encourage its adversaries (China, Russia, North Korea), than Trump.

Ultimately, his erratic behavior, nationalistic instincts and the deluge of scandals overwhelming the Trump White House has unnerved nations around the globe. And now the threat of impeachment dangling above him like the sword of Damocles will almost assuredly make for a progressively more unhinged 45th president.

“I think his impeachment is overdue,” said Anitah Kajumba, coordinator for the Dutch Entrepreneurs in Uganda.

“What it means for Africa is certain relations will be renewed, the tariffs and embargoes scrapped, more migrant labor to the U.S., and more revenues for Africa,” she added.

“Although there might be some claims of domestic politics going on, but it is a reflection of what is seen as his behavior…towards other countries, be it European, be it African, be it Asian around the globe,” said Mpyisi.

“So, since he took office the world has been mystified by his form of diplomacy, his actions, and we cannot actually say that there is something coherent. So, I think from an African perspective, we don’t know exactly what we’ll get from one day to the other.” 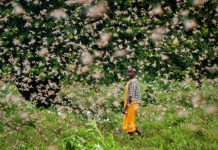 ‘This is Huge’: Locust Swarms in Africa are Worst in Decades