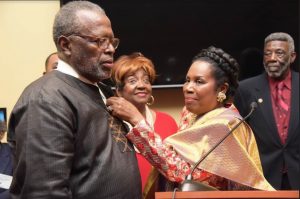 Congresswoman Sheila Jackson pins Merretazon with the 50th Year Commemorative Vietnam War Pin during a salute to veterans on Capitol Hill during a 201718 Congressional Black Caucus Braintrust acknowledgment of Black Veterans involved in the Vietnam War.

A court is expected to hear soon more arguments in a case Merretazon has brought against the city.

Philadelphia officials have failed to follow a 1955 provision in the city charter that created a budget for an Office of Veterans Affairs with a salaried director, Merretazon’s suit claims.

While there’s a Veterans Commission, an Office of Veterans Affairs could have reached more local returning soldiers and helped them receive more substantial benefits.

“They are not in compliance with the law,” stated Merretazon, whose story of the Viet Nam War was highlighted in the 1984 book, “Bloods: Black Veterans of the Vietnam War, An Oral History,” by Wallace Terry. 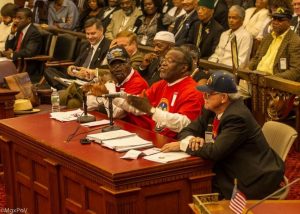 Merretazon (center) testifies in support of Resolution 120042, to determine the readiness of the City of Philadelphia to serve and assist returning soldiers from Afghanistan, Desert Storm, and Iraq, City of Philadelphia, City Council, September 11, 2012

The book was later the inspiration for the 1995 motion picture, “Dead Presidents,” which reviewers called the most powerful depiction of Black veterans in the history of American cinema.

The film starred Terrence Howard, Larenz Tate, and Chris Tucker as returning Vietnam War veterans whose lives after discharge were plagued by crime, addiction, and a host of psychological challenges.

“As Black veterans, we not only face post-traumatic stress syndrome (PTSD), but we have racially induced PTSD as well because there’s so much racism in the military,” Merretazon said. 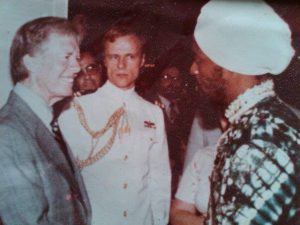 Acknowledgment by the White House, President Jimmy Carter, for establishing the first Veterans Affairs Office inside of a prison (D.C. Dept of Corrections, Lorton Reformatory, 1978)

He believes race has played a significant role in his battle with Philadelphia that’s led to the current court case.

“Philadelphia needs to acknowledge that racism in the military is a PTSD injury,” Merretazon said.

Researchers at the U.S. Department of Veterans Affairs have conducted various studies of PTSD in ethnic minority Vietnam Veterans. The results of the research are not entirely consistent. Still, VA officials noted that the overall finding seems to be that most ethnic minority veteran groups have a higher rate of PTSD than White veterans.

According to the VA, some of this may be due to psychological conflicts related to identification with the Vietnamese. Another factor may be higher exposure to war zone stressors, VA officials stated. 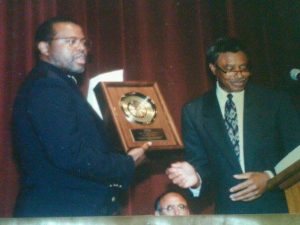 “It’s been years, if not ever, that Philly hasn’t met any of its obligations to veterans,” Merretazon stated. “My anger is based on the fact that we have had to fight two wars. One was in the field of battle in Vietnam. And, the other at our base where rebel flags flew and Black soldiers had the worst jobs.  They threatened us with going back to the field with those who were less qualified.”

Merretazon said his court battle had progressed well. An appeals panel earlier indicated that the only thing keeping him from prevailing was that he lived outside of the city.

“I live in a neighboring county, but I do my work in the city of Philadelphia,” Merretazon stated. “But, it’s clear that Philadelphia is trying to cover up their misdeeds toward veterans. The fact that there’s no office of veterans affairs is wrong. Philadelphia, in particular, City Council President Darrell Clarke, has messed up the money for veterans, and that’s why we are where we are.”

A spokesperson for Clarke declined to comment, citing the pending lawsuit.

Merretazon has obtained full benefits, but, he must continue to fight for others.

“The veterans who come home to Philly have nobody saying what to do, and through our ministry, we’ve been able to provide direction on direct services,” Merretazon said. “It’s well-known that many are hurting. There are significant guaranteed benefits for the veterans and their families, but they aren’t getting them. “I’m 100 percent disabled. I’ve got mine. I’m trying to help other people get what they deserve.”