The third-highest ranking member of the Republican controlled House of Representatives gave a speech before a White supremacist group run by David Duke in 2002. And while Steve Scalise of Louisiana apologized after the information came out late last year and recei 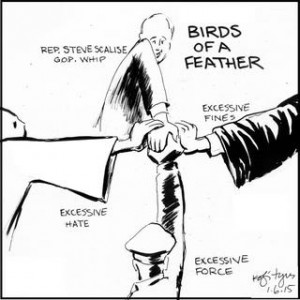 ved some mild admonishments from his party, he still has his leadership position.

These are the people who now control both the House and the Senate following last year’s election. As Republicans take power this weekthey are making noises about leading and passing legislation in the 114th Congress. They say their priorities are things like the Keystone XL pipeline, and heathcare reform.

But with the radicals in the Tea Party still exerting influence look for them instead to focus on obstructing and attempting to roll back President Obama’s agenda for the remainder of his term. Things like his executive actions granting a legal reprieve to some undocumented immigrants and opening up relations with Cuba are likely to come under fire from Republicans. And let’s not forget their continuing efforts to eliminate Obamacare, which has given millions of people access to healthcare.

While the Republicans say they want to act like grown-ups now that they’ve got the power, we’re not holding our breath—buckle-up.

COMMENTARY: Billions for Boeing, Pennies for the People